A Woman's Walk with Jesus & Who IS Veronica?

If you've never heard of them, it is a spiritual meditation on the final moments of Jesus' life, broken up into (typically) fourteen events - from being condemned to death to laid in the tomb. Typically on Good Friday if you go to a reading of the Stations (many churches, including mine, have them every Friday during Lent), one reader will read the text for each Station, followed by "We adore you, O Christ, and we bless you." Then the congregation says, "Because by your Holy cross, you have redeemed the world." The priest and altar servers will process around the church and stand in front of each station as it is read. On that note- if you're in a Catholic church and you see stained glass or wooden images with roman numerals under them, chances are, you're looking at the Stations of the Cross!

They date back to the 4th century when Christian pilgrims to the Holy Land would recount the walk that Jesus took to Golgotha. When Muslims captured Jerusalem and it became too dangerous to make the pilgrimage, Christians brought the concept home and viola! They are also knows as the Via Dolorosa, Way of the Cross or Via Crucis.

There is something so sad yet beautiful about walking with Jesus on this road. To reflect on these 14 moments and think about how long and arduous that journey was and what it did for us is the perfect way to close out the Lenten season and get my mind and heart ready for Easter.

Thanks to CatholicMom.com I came across A Woman's Stations of the Cross. Now these aren't going to be read in a formal setting at church, but that doesn't mean you can't take them and sit in church by yourself and do a little quiet reflection. Or how great would it be to bring these to your next women's bible study?! I'm sure everyone would appreciate it & grow from it.

On a separate but related note, a couple of years ago a dear friend of mine accompanied me to a Friday night Stations of the Cross. She is not Catholic. She asked me about Veronica. The sixth station is "Veronica wipes the face of Jesus". I said, uh... it's Veronica. I was baptized at St. Veronica Catholic Church in Milwaukee. Of course there's a Veronica! She's not in the Bible? I figured she was mentioned in just a verse or two and I had missed it. So I did my research. Here's the gist (source, bustedhalo.com):

Regardless of how much you search and how closely you read the text, you won’t find an account of what we know of as the sixth station of the cross, Veronica wiping the face of Jesus, because it isn’t in the Bible. It is one of our Catholic legends that grew up after the Bible was written. The sources of the legend are varied, but it is noted in some medieval texts and includes the detail that after Veronica gave Jesus her veil to wipe his face as he walked to his death on Calvary it bore an imprint of his face. In the 1800s, a Carmelite nun, Sister Marie of St. Peter, reported a vision of Veronica wiping away the spit and mud from Jesus’ face. The name Veronica itself is sometimes said to derive from “Vera Icon” meaning “true icon.”

Stations of the cross numbered three, seven, and nine — recounting Jesus falling three times — are also not to be found in the Bible although they, too, have become part of the popular imagination around Christ’s Passion.

I encourage you to join me (and more importantly, Jesus) before Lent ends. You'll be glad you did!
Posted by Abby at 10:09 AM 3 comments:

It's a crime how much we spend on laundry detergent. Isn't it? (That's the end of the pun. No more money laundering associations possible.) The other day a friend posted on FB that she just completed a new batch of DIY laundry detergent that would last her family of four like, eight months! Come again? Eight months?

There's little more painful than going to the grocery store for a quick in-and-out trip and remembering you're almost out of laundry soap. $16.99? Seriously? So when I saw that this concoction was supposedly going to last 2/3 of a year and not cost much more than a single bottle, I was willing to take the bait.

I mentioned it to my housemate/landlord/mother and she asked if it contained lard. Ah... no. It's not quite THAT DIY.

Here's the "recipe". And before you even ask, it says it's safe for HE/front loading washers. 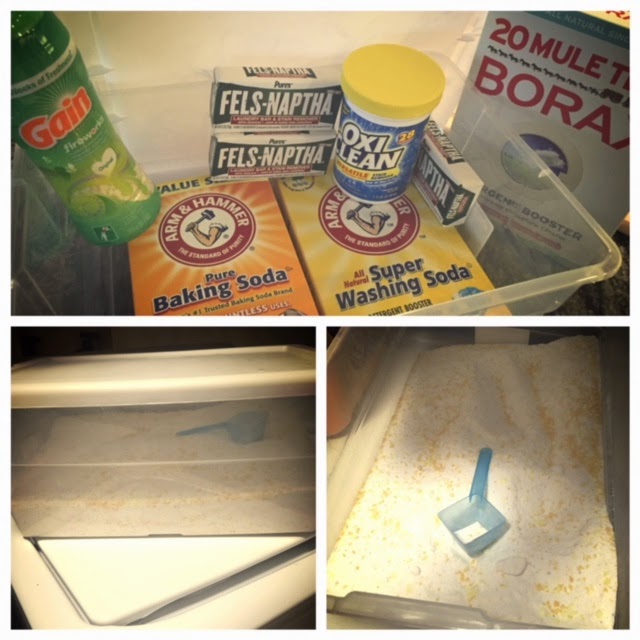 The only tricky part is the Fels-Naptha. I started out by grating it and then put it in the food processor. It didn't get as fine as shown in the "Happy Money Saver" pics. In fact, I don't know how she got it that fine. When you put it in the processor, even on pulse, the heat causes the Fels to melt enough that it became little balls. I put some of the Gain in and the dryness helped a tad. Bonus - it only takes 1-2 tablespoons per load, and the Oxi Clean comes with a scooper that is slightly more than a tablespoon.

As I write this, my first load is in the dryer. I checked out a piece of my 1 year old's clothing that had... how should I say... leakage on it and it came clean, but I have yet to look at the entire load. I was a little concerned that there might be a film or waxiness on it and from what I've seen it looks good-to-go.

Worst case- I put this aside and only use it on loads that aren't super dirty. All the materials were about $22 at Publix, so in my budget's opinion, it was worth testing out.

Happy legal laundering!
(Okay. I lied. One more laundering pun)
Posted by Abby at 8:27 AM No comments:

Catholic Icing - such a great website for moms of compact to mid-sized kids (yes, I size up the kids just like rental cars)! I love this idea to help bring Holy Week to life and give them another way to connect with each day. It's $2 for the download - for a limited time only! :) Check out the site here. 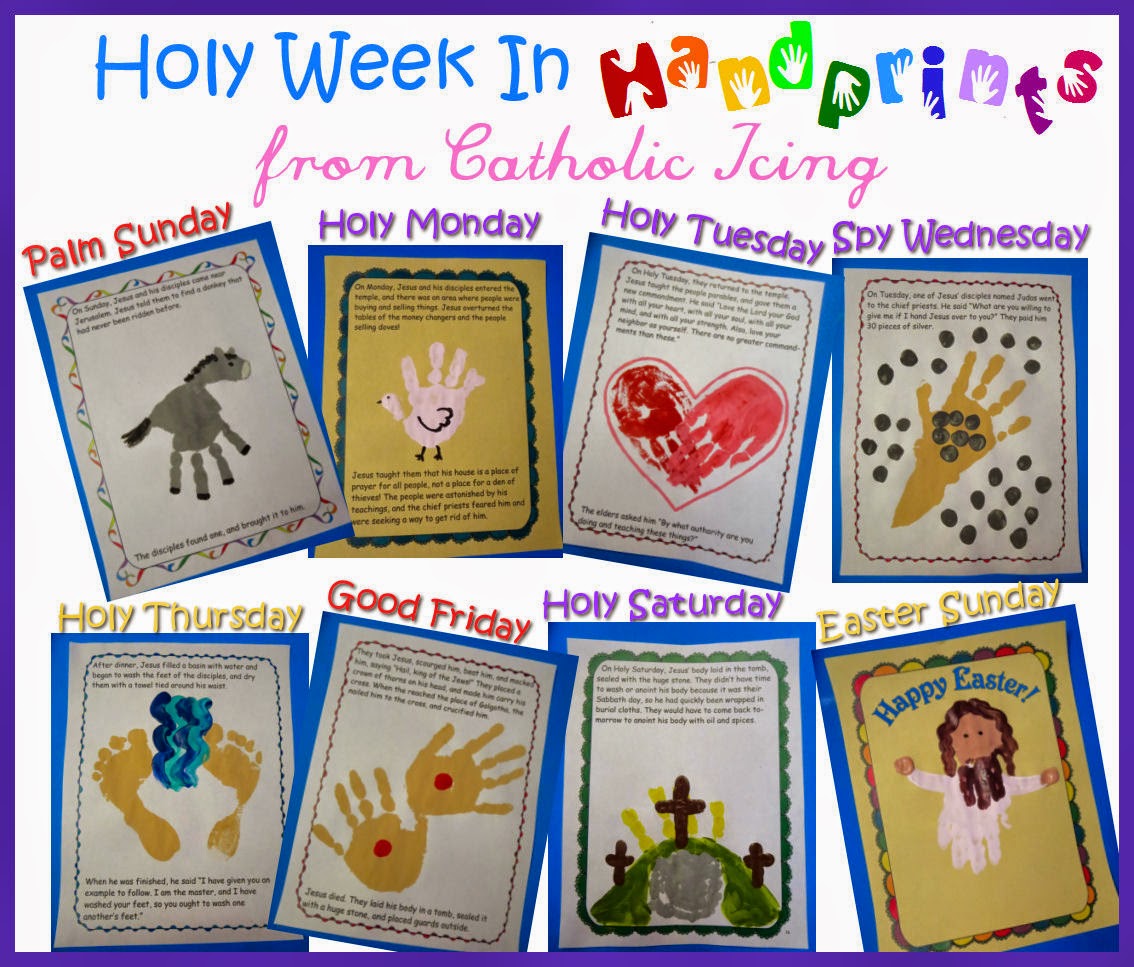 Thomas the Tank Engine is Rolling into Town!

We are thick in the world of Thomas the Tank Engine at my house. My big guy loves him and you can often hear my little one shouting, "Choo! Choo!" Boys and trains. I don't get it. I have to say though, I am good with sitting down for an episode (or two) of Thomas. It's relaxing, smooth and instills good morals, which is more than can be said for a lot of the other shows out there.

All this week we've been giving away tickets to Day Out With Thomas at The Florida Railroad Museum in Parrish. The event stretches over two weekends, March 14-15 & 21-22. There are two more giveaways - one tomorrow and one Friday. Here's the inside scoop - tomorrow's (Thursday's) giveaway will be between 8:10 and 8:20am!

The gist of the giveaway: You listen in on a conversation between me and Liam and then I quiz you on something he said. So it's a little bit of listening comprehension. Yikes. To be honest, as he's pointing to characters in the Thomas book we are looking at, I HAVE NO IDEA what he's talking about. He can see one episode and know the characters' names. I'm still figuring out the difference between Thomas and the other blue one!

For more on Day Out With Thomas click here.
Posted by Abby at 8:54 AM No comments: