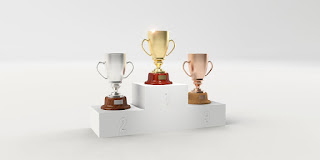 I tell the little one to go get socks. He runs. We decide to go down the block to see my parents. He runs. My older one runs to me to tell me he has to go potty. I tell him to stop reporting to me and go! He runs to the bathroom.

It was no surprise to me last week when, upon agreeing they wanted to play trains, my 5-year-old said, "Let's race!" The play room is about 8 feet away from where the plan originated, so the little one was at a serious disadvantage and had zero time to catch up. Still, he was all in! So the two-second race ended as quickly as it began with one yelling out, "I win first place!"

For some reason whenever the two of them compete, I expect there to be tears from the loser, but there rarely are. What I heard on this occasion brought me joy and a challenge.

My three-year-old didn't complain that his big brother won the impromptu race or that he got off to a late start. He just celebrated his grand second place finish.

There's the sad saying, "Second place is the first loser." I wonder how many people don't even try something at which they might not succeed because they are afraid of being the "first loser."

Meanwhile, my little guy, in his wisdom, saw that he was a winner, not because he was the first to get to the finish line, but simply because he ran. How is he so wise? Must be all the calories he burns from running. Everywhere.