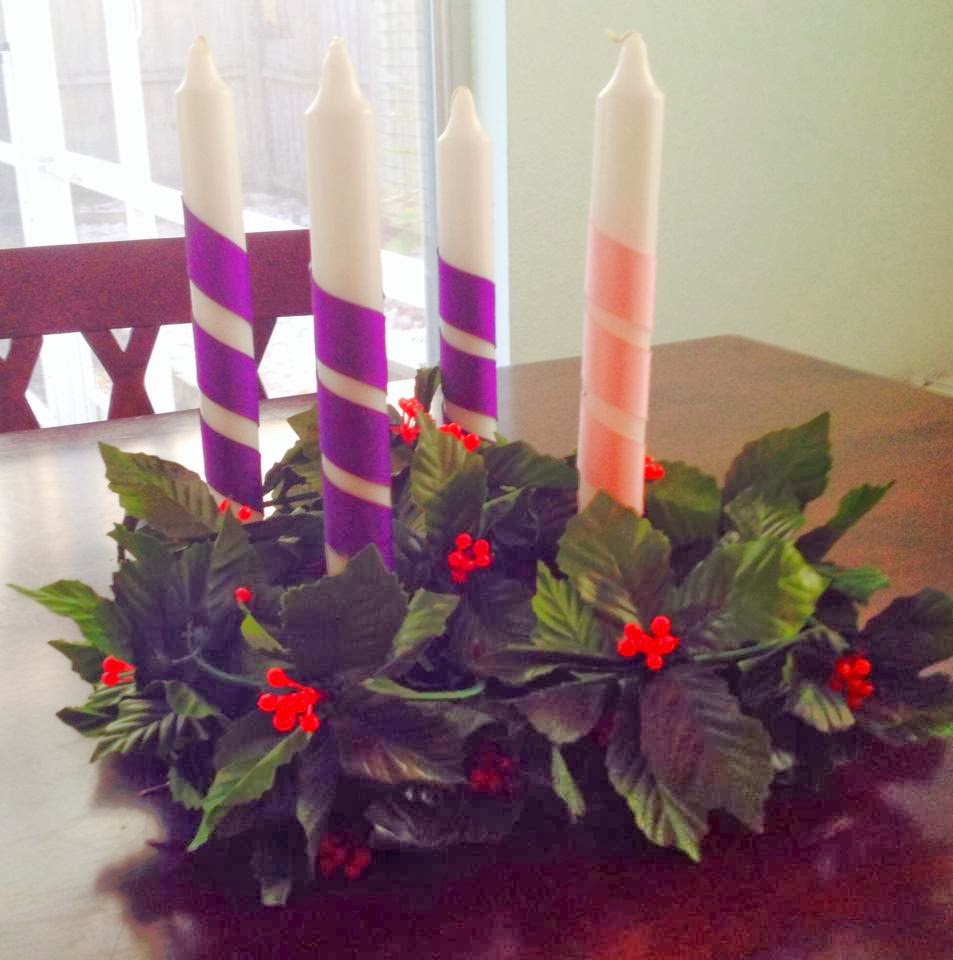 Happy Advent! Do you have your wreath up yet? Don't worry if you're behind. Remember the gospel about the workers in the vineyard? The master gave the same wage to those who joined in at the end. You'll still receive wonderfully beautiful graces even if you're a week (or two or three) late. I made my wreath out of plain white candles and ribbon. The greenery is just a long strand wrapped around the candle holders. Obviously, this is not portable!

One of my favorite lead-ups to Christmas is the celebration of St. Nicholas Day. I didn't realize that not everyone celebrates it the way we did growing up. Every year, on the morning of December 6th, my sister and I would awaken to find stockings filled with treats. The treats were small, like lip gloss and M&Ms. But we always looked forward to it as a precursor to Christmas. I found out recently that this tradition is strong in the state of Wisconsin, where I was born & where my parents spent their first 35 years. Makes sense.

I want to start this tradition in my own home as a way to teach my kids about the life of a wonderful saint. Not all the saints have the vivid illustration and attention of our kids' ears like St. Nick, so why not make the most of an opportunity. My plan? An orange or tangerine and a few other small treats in the stocking. I don't plan to say it's from St. Nicholas, but rather, the stockings are filled as a way to celebrate the life of St. Nicholas. Part two of this plan is to try to incorporate some act of service or generosity. After all, that's what St. Nick did!

One idea that's a little too old for kids my age, but is still a great idea is the Drive-Thru-Difference. If you haven't done it before, do it tomorrow to celebrate this feast day. The gist, pay for the person behind you in the drive-thru and give the letter explaining why you did it to the employee to pass on. It's a good idea to say a prayer too and ask God to put the right person behind you in line. He knows what he's doing! St. Nick would TOTALLY be into this as he was known for (among other things) blessing people in secret, hence the filling of the stockings in the middle of the night. Look at that! You're on your way to being a modern-day saint!